I know, it has been ages since I wrote anything on my blog. Wasting my time has prompted me to share a PSA with you: Breaching the Tomb is not an account-wide achievement toward unlocking your class mount. I know I haven’t had a lot of things to say for quite a while now. Games I’ve been playing have been in a state of limbo for a really long time. I am looking forward to Anthem next year and may have a lot to say about that game when it comes out. I really hope that I have many posts to write full of gushing fun and excitement. But, on to the reason for breaking my silent streak… class hall mount misinformation…

I’ve been playing a bit of WoW after taking a break near the end of Legion. Playing catch-up has been interesting. I didn’t finish Legion and I didn’t do the lead up content in the patch ahead of BfA, since I was on a break from the game from 2016 up until last month (long break…). However, as a public service to save those of you who find this some precious time, the Legionfall campaign achievement IS NOT account-wide for unlocking your class mount, as of Oct. 1, 2018. I finally found an article on the Blizzard support forums that was updated 3 weeks ago that states this fact very clearly. It is article ID 102814 if you want to keep track of this on your own.

I wish I’d found this article before I spent the time to unlock Broken Shore on my Shaman and then tried talking to Orono before and after logging out, waiting for an assault on a building to be done and trying to talk to him again, talking to Khadgar, going to my class hall to try to talk to people, checking my quartermaster, looking at forums again, searching wowhead, pestering my guild mates, etc. So if you are out there searching for things like Why can’t I start my class mount quest? or What steps do you need to finish to unlock the class mount? I hope you find this before you find the (WRONG) answers I got.

I’ve spent a lot of time reading conflicting information about class mounts. Going into the Legionfall campaign on one of my characters, I was mistakenly led to believe that I’d only have to do it once. Heck, I even read some information claiming that I could just buy a class mount from a quartermaster without having to run the errand quests to finish the unlock that I did on my mage. Nope, don’t bother looking for mounts from your class hall quartermaster, you won’t see them. This information is current as of today, but who knows how it might change with the next big patch update. If it does, I’ll try to update this post. I hope you are having fun and that this saves you from unlocking the class hall mount on the wrong character like I did (p.s. I REALLY wanted it on my demon hunter, but my mage is a human and gets the bonus rep. so I used her for the achievement).

Breaching the Tomb is not an account-wide achievement toward unlocking your class mount. You will need to do all of the quests listed in that achievement on each of your characters that you want to have a class mount for. This WoW public-service announcement is current as of Oct. 1, 2018. Dear demon hunter, you are not prepared… after all. 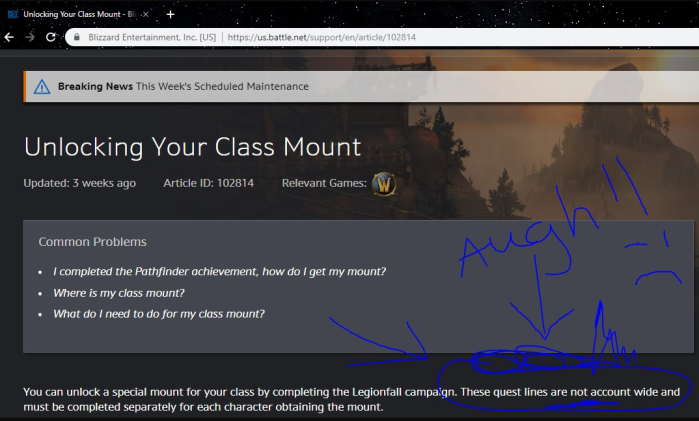 gaming, books, and how I fill my free time

A Book Blog for Speculative Fiction, Graphic Novels... and more!

Casual Gaming with a Classic Twist

Video games, board games, quadcopters, and other hobbies.