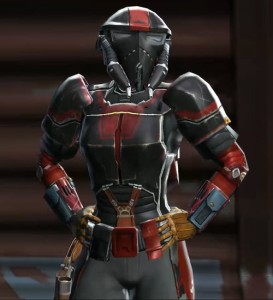 I admit it, in the dark side/light side equation, I’m pretty far into the light side of things by nature. The characters I relate to the most in games, books and movies tend to be heroic and look out for others more than themselves. I think that is why I really like Mal from Firefly even though he made some ruthless and dark choices. Ultimately, he did them for what I considered to be the right reasons. I’m certainly not black and white when it comes to making choices in games, but more into shades of light gray. That is why trying to play a character outside my general nature can be so hard for me. SWTOR definitely pushes those boundaries when I play both fully dark side but also fully light side characters. Another Bioware game, Mass Effect, causes similar quandaries when I try to play fully renegade.

The Bounty Hunter class has been the one class in SWTOR that I’ve had the most qualms when playing fully dark side. That class has some pretty gruesome and highly ruthless dark side choices to make. I don’t want to go into specifics to spoil things, but this weekend I played my dark side bounty hunter through to the end of chapter 13 and she made a choice that actually put a look of shock on a dark side NPC’s face. Seeing a Lord of the Sith, Lana Beniko, shocked and subdued was interesting. I hated that choice. Talk about regret. I’ve stuck to my guns (pun somewhat intended) with playing one Bounty Hunter dark side, but it has been really rough. And I had to play a mostly light side Hunter to redeem that class for me.

Of the classes in SWTOR that I’ve played dark side, the Sith Inquisitor seems to lend itself best to going that route, at least for me. With the Sith Warrior, I found some of the dark side choices to be the stereotypical thug choice, and I went light side with some of them instead. She’s still dark and evil, but I allow her a bit of pragmatism now and then. I started playing a dark side Jedi Knight and a dark side Smuggler and just couldn’t continue down that path with them. For the smuggler, there needs to be a little bit of the hero in them or I just don’t enjoy them as much. However, some of the best lines in that class come from being less diplomatic or helpful. My Jedi Consular was easier to play dark side, but I still had a hard time justifying why the Jedi Order kept him around.

I enjoy games that make me stretch outside my comfort zone every once in a while. It does make me wonder about the kind of person who actually expects to play characters that way all the time. I wonder if the things that make me cringe bother them, and if not, yikes! The ruthless leader may work for some people, but I don’t consider that real leadership. Part of me hopes that poor leadership choices on the part of my Bounty Hunter really cause her problems later on, at least as much as is possible in an MMO. It will be interesting to see how it all plays out later. Either way, having made a certain dark side choice in chapter 13 once, I’m good for not doing it again.

9 thoughts on “Playing Game Characters Against My Nature”

gaming, books, and how I fill my free time

A Book Blog for Speculative Fiction, Graphic Novels... and more!

Casual Gaming with a Classic Twist

Video games, board games, quadcopters, and other hobbies.